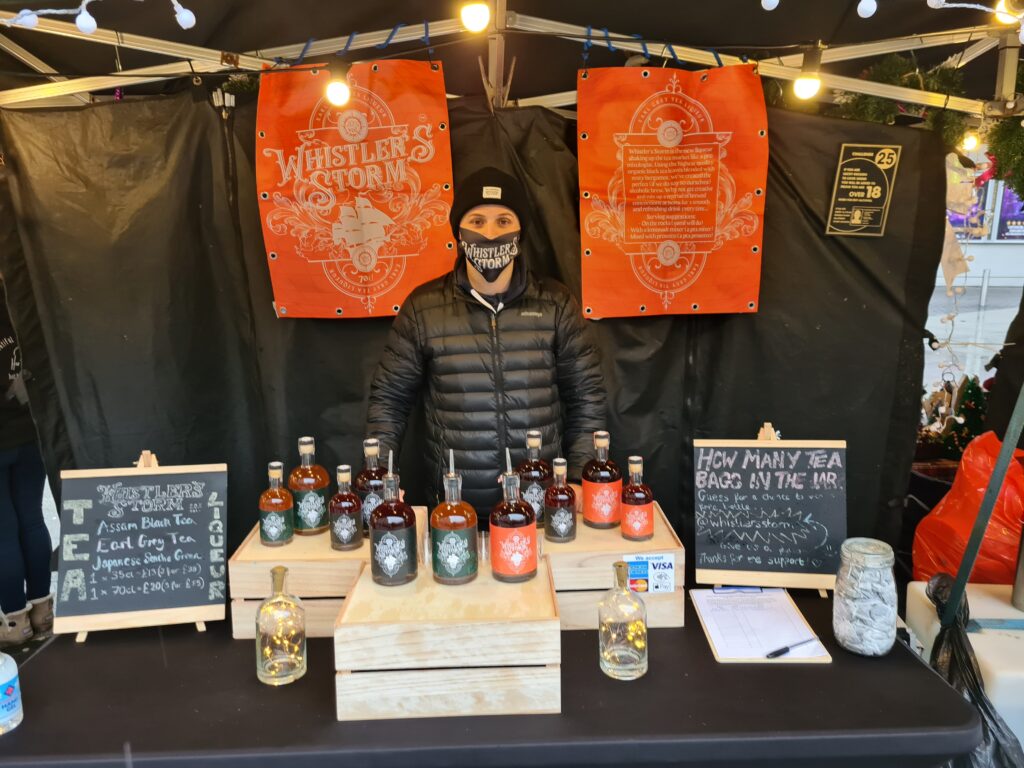 At our very first event in December 2020

Hi everyone, it’s Dom here the founder of Whistler’s Storm.

I’m so happy that the website has reached its launch stage, to me it feels like such a long time coming however in reality it hasn’t been!

As explained on the site, a visit to the lush tea plantations of Kerala in India in 2019 really did give me the inspiration to do something different. I came up with a grand plan on the spot to start importing these southern Indian varieties of tea to the UK to show them off however on my return I decided I wanted to do something else and I started to think of ideas of how to utilise tea leaves in a way different to the norm.
I was experimenting making some different liqueurs in the first few months of 2020 and at some stage of this liqueur making adventure, the idea popped into my head to incorporate this activity with my new-found appreciation for loose leaf tea. I tried loads and loads of recipes in the following months, learning a great deal about liqueurs and spirits in the process but also about the many varieties of tea. Whilst we have launched the brand with just two flavours, there are many more delicious recipes waiting in the wing so keep your eyes peeled in the future for some new creations.

Over the course of 2020 more tasting, perfecting of recipes, and learning more about the start up world took over but things did progress and eventually a point was reached where I had some final flavours I was happy with and off Whistler’s Storm went to our first ever event at some Christmas markets in Manchester in December. This was the first real test event for me as testing on the public is very different to family, friends, acquaintances trying the product!

The markets literally went down a ‘storm’; there was heavy rain and winds most of the time however the footfall was there and we had some amazing feedback for the product. Off the back of this, I decided to take the brand further and scale up production and do a proper launch which just happens to be today! It would mean a lot for you to try some of the liqueurs, both the Assam Black and Earl Grey flavours really do taste delicious, they combine British people’s two most favourite things so how can you go wrong there?!

We have some epic new branding courtesy of Sand Creative and fantastic photos taken by Paul Matthews so thanks very much to both, you have really brought the brand to life!

I have to give a special mention to some amazing friends Rafi, Vic, and Bex for their support during this journey so far, it would likely not have been possible without you! Also, many thanks to everyone else who’s been involved in any way so far, again we definitely wouldn’t have been at this stage without your input!

Behind the Scenes, News